In 1980 I was honored to illustrate the first officially sanctioned poster for the Boston Marathon. I was commissioned by Blue Cross/Blue Shield of Massachusetts, the first corporate sponsor of the race. Copies of this poster for the famous race seem to have disappeared from sight. My research of Boston Marathon posters on Ebay, Art.com and other venues show other year’s posters, but not my poster of 1980. I have preserved in mint condition 130 posters, and am now making available for purchase 100 autographed and numbered editions of the offset press posters from the original press run (not giclee or lithograph prints). The opportunity to purchase these valuable posters of this historic event is now. Each purchase will include my signed Certificate of Authenticity.

The conceptual focus of the design and illustration with the BC/BS marketing team was to focus on the famous “Heartbreak Hill” of the marathon that creates much lead runner drama. I tried to capture the humanity of the race as an undulating snake traveling up Commonwealth Ave., the race route, as it winds through Newton, MA., near Boston College. Look closely at my illustration to see the Prudential Building in the top left corner, the actual finish line of the race. The quote by Shakespeare from King Richard II on the poster sums up the “Heartbreak Hill” quite well. “These high wild hills and rough uneven ways draw out our miles and make them wearisome…”

Later that year this illustration earned an Award of Merit in the illustration category of the Art Directors Club of Boston awards show.

Order by PayPal now this collector’s item. Poster dimensions are 14.5″ x 28″:
Item Total $145.00 / Shipping and Handling $9.50
All sales are final due to the series edition numbering standards. 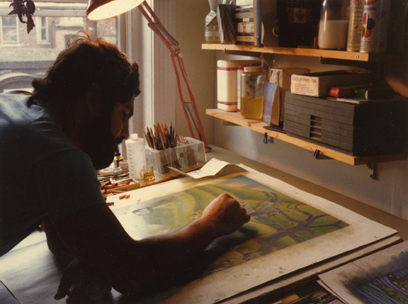 Working on the poster in my fifth floor walk-up studio on 41 Garden St, Beacon Hill, in Boston. I recently found this photo and on closer scrutiny in the upper right corner I see in the process I had a tree with people in it , I guess it never made the final cut. #bostonmarathon #bostonmarathonposter

"Armen Kojoyian is the one to turn to for any creative project, simple or complex. His creative expertise is vast, and he has his finger on the pulse of what’s new in the techno world we live in! No old static ideas! He keeps it fresh, works intuitively from his creative core and pumps out ideas quickly, with great detail and originality. The graphics for my new logo were so on target for my company, one would think he was plugged into my brain! I would highly recommend him for any creative project.” —Susan Grier, Design Director, Warnaco Group

Enjoy my print on demand graphic stores and galleries to view my favorite artworks and graphic creations. Visit studioArmen at Cafe Press, studioArmen at Zazzle, graphiqArmenia at Zazzle. Imagekind a online print gallery of artwork and photography showcases more of my fine art pieces. Armen Kojoyian Imagekind. Inquire about direct purchases of any original creation seen within this site. A custom ordered hand signed print will be delivered on a archival giclee museum quality paper for a valued collection or gift.