Since my college days at the University of Rhode Island where I was a fine art major and jock, and with those opposing interests confounding my campus peers from the studios of the fine art building to the athletic field. Art and sports over time merged with a fascination for sports trivia of a older century in Rhode Island. It was always hard to fathom how such a little state with no mega-city won a baseball and football world championship. The Providence Grays were baseball world champs in 1884, the Providence Steam Rollers were football world champs in 1928. Red Grange the “Galloping Ghost” of the Chicago Bears even played in Providence against the Steam Rollers.

Flash forward several years and with the power of the internet I was able to research these teams once again since my interest in them never died. I felt these teams needed to be revived in a graphic homage, so I investigated the details of their uniforms, history, and antique photos to create a memorable graphic of that era. Unwittingly my research turned up another championship team of  Rhode Island I never knew of called the Providence Reds a hockey team that won a few Calder Cups, so one day I will have to honor them too! Below you will see my creations comprised from clip-art, digital illustration, and ornate typography that can be viewed as merchandise at my Cafe Press and Zazzle stores.

Providence Grays at Cafe Press and at Zazzle POD stores. 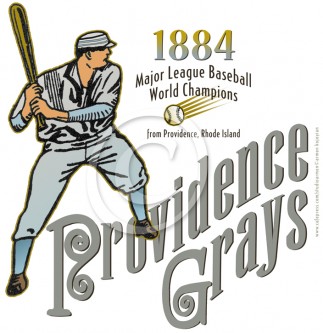 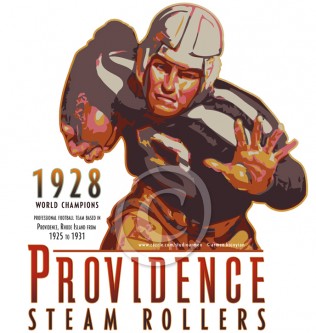